While content is essential to an effective speech, delivery is what can take a speech from “good” to “great.” The smallest variations in timing, intonation, or gestures can greatly influence the meaning and impact of a speech, so it is important that we study and practice the art of delivery 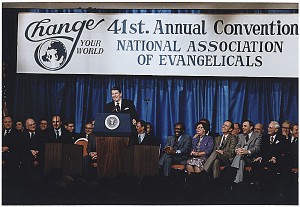 Voices of Democracy contains video or audio recordings of a number of great speeches in history. These videos can be used to learn about the importance of pauses, pronunciation, body language, and other aspects of effective delivery. Among those are videos of several U.S. presidents who scholars have praised for their delivery skills. Although considered a weak speaker in his youth, John F. Kennedy is now regarded among the best presidential orators. Likewise, we still remember Ronald Reagan (left) as “The Great Communicator,” and Barack Obama’s political success is often attributed to his speaking skills—by supporters and critics alike. What is it about the delivery of these three presidents that warrants such praise? Watch these videos and judge for yourself:

On VOD, each of these speeches is also accompanied by Teaching & Learning Materials, including some questions that encourage you to reflect further on the importance of delivery and its relationship to the content of great speeches in history.