Click here for the VOD unit corresponding to this lesson plan.

CCSS.ELA-LITERACY.RI.11-12.1 Cite strong and thorough textual evidence to support analysis of what the text says explicitly as well as inferences drawn from the text, including determining where the text leaves matters uncertain.

CCSS.ELA-LITERACY.RI.11-12.6 Determine an author’s point of view or purpose in a text in which the rhetoric is particularly effective, analyzing how style and content contribute to the power, persuasiveness or beauty of the text. 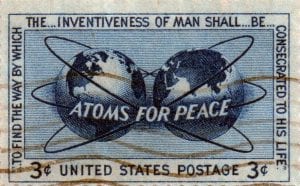 “The year 1953 represented a tension-filled period in the cold war; the Eisenhower administration responded to the exigencies both publicly and privately. On March 6, 1953, Joseph Stalin’s death was announced to the world. As the leader of the Soviet Union and General Secretary of the Communist Party’s Central Committee, his passing was viewed as an opportunity for the United States to take advantage of a Soviet transfer of power and address fears about nuclear proliferation. In response to Stalin’s death, President Eisenhower delivered his famous “Chance for Peace” address on April 16, 1953, to the American Society of Newspaper Editors. Assessing this speech, Ira Chernus suggests that it “identified the Soviet Union as the sole source of nuclear threat.” In the aftermath of the “Chance for Peace” speech, the Eisenhower administration privately planned “Operation Candor,” which was designed to tell the truth to the American people about the increasing dangers of atomic weapons and the escalating cold war with the Soviet Union. The Eisenhower administration often referred to this period as an “Age of Peril.”… Fears were also mounting among the American people over the intensification of the cold war. In April of 1953, the Vietminh invaded northern Laos as the French stronghold in the region deteriorated. The July 27, 1953, Armistice Agreement left a divided Korea; the war thus failed to create a unified Korea devoid of communist infiltration. In a matter of weeks, the Soviet Union had also tested its first hydrogen bomb.”

Day 1: Pre-reading, Introduction of Important Vocabulary/Figures, and Beginning the Speech

Day 2: Implied Arguments: Continuing on Themes of Peace in a Perilous Nuclear Age

Ideas for Post-Reading and Assessment