The Sochi Winter Olympics have been surrounded by excitement and anticipation, but not all the press has been positive.  Russia’s controversial anti-gay laws have sparked debate, protest, and even violence within both Russia and the international community, even spurring some world leaders to boycott the games in Sochi. 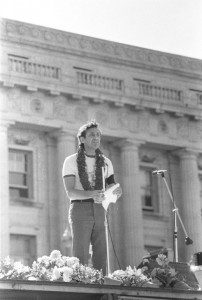 This is not the first time gay rights has been a hot-button topic, nor will it be the last.  The Voices of Democracy unit on Harvey Milk’s 1977 speech, “You’ve Got to Have Hope,” provides users with a look back into the tumultuous history of gay rights politics, specifically as they existed in late-1970’s San Francisco.  Accompanying the unit is an interpretive essay, in which the authors examine Milk’s theme of hope and how it served to unite gay community members with straight allies.

The speeches and interpretive essays on VOD are useful for both instructors and students interested in gaining a deeper understanding of an important speech and its enduring legacy.